A Few Of The World’s Biggest Losers 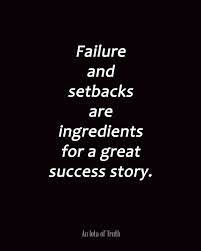 Successful people often fail their way to success. Lance Armstrong won his 5th Tour de France after battling testicular cancer. Elvis Presley became “the King” after being fired from his first performance at the Grand Ole Opry being told he had no talent. Albert Einstein became a world renown scientist after being rejected by the Munich Technical School for showing no promise. Michael Jordan has become one of, if not the best, basketball player of all time after being cut from his high school team. The life of actor Michael J. Fox changed after learning he had multiple sclerosis, but it did not end. Chronic fatigue syndrome kept Laura Hillenbrand bedridden from August 1991 to the summer of 1994, but it didn’t stop her from writing the bestselling racehorse drama Seabiscuit. Thomas Edison failed thousands of times before he succeeded in making the first electric light bulb. Walt Disney got 33 rejections before he found financing for his theme park. Colonel Sanders got turned down 1,000 times before he found a buyer for his fried chicken recipe. Mark Victor Hansen was turned down 30 times before signing a 2.8 million dollar contract for his Chicken Soup for the Soul books. And we’ve all heard of Abraham Lincoln’s list of failures before becoming president.

The obvious point is that many of the most successful people in any field had what could have been a career-ending setbacks. The difference...failure led to inner motivation which eventually led to success! With a positive attitude, a program, patience, and persistence, you can get amazing results.

In work, the greatest satisfaction lies in the satisfaction of stretching yourself, using your abilities and making them expand, and knowing that you have accomplished something that could have been done only by your unique apparatus. This is really the center of life, and those who never orient themselves in this direction are missing more than they ever know. Kenneth Alsop.