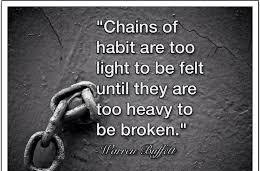 Cherish your visions. Cherish your ideals. Cherish the music that stirs in your heart, the beauty that forms in your mind, the loveliness that drapes your purest thoughts, for out of them will grow all delightful conditions, all heavenly environment; of these, if you but remain true to them, your world will at last be built.
---James Allen

When Mozart was composing at the end of the eighteenth century, the city of Vienna was so quiet that fire alarms could be given verbally, by a shouting watchman mounted on top of St. Stefan's Cathedral.  In twentieth-century society, the noise level is such that it keeps knocking our bodies out of tune and out of their natural rhythms.  This ever-increasing assault of sound upon our ears, minds, and bodies adds to the stress load of civilized beings trying to live in a highly complex environment.
---Steven Halpern

The perfect no-stress environment is the grave. When we change our perception we gain control. The stress becomes a challenge, not a threat. When we commit to action, to actually doing something rather than feeling trapped by events, the stress in our life becomes manageable.
---Greg Anderson

This is my depressed stance. When you're depressed, it makes a lot of difference how you stand. The worst thing you can do is straighten up and hold your head high because then you'll start to feel better. If you're going to get any joy out of being depressed, you've got to stand like this.
---Charlie Brown

The happiness which brings enduring worth to life is not the superficial happiness that is dependent on circumstances. It is the happiness and contentment that fills the soul even in the midst of the most distressing circumstances and the most bitter environment. It is the kind of happiness that grins when things go wrong and smiles through the tears. The happiness for which our souls ache is one undisturbed by success or failure, one which will root deeply inside us and give inward relaxation, peace, and contentment, no matter what the surface problems may be. That kind of happiness stands in need of no outward stimulus.
---Billy Graham

Almost everything – all external expectations, all pride, all fear of embarrassment or failure - these things just fall away in the face of death, leaving only what is truly important. Remembering that you are going to die is the best way I know to avoid the trap of thinking you have something to lose. You are already naked. There is no reason not to follow your heart.
--- Steve Jobs

Whatever you do, you need courage. Whatever course you decide upon, there is always someone to tell you that you are wrong. There are always difficulties arising that tempt you to believe your critics are right. To map out a course of action and follow it to an end requires some of the same courage that a soldier needs. Peace has its victories, but it takes brave men and women to win them.
---Ralph Waldo Emerson

Coaching for Performance: GROWing Human Potential and Purpose - The Principles and Practice of Coaching and Leadership, 4th Edition 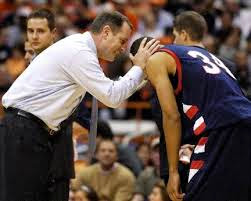 I have come to a frightening conclusion. I am the decisive element in the gym, on the field, or in the yard.

It is my personal approach that creates the climate. It is my daily mood that makes the weather.

As a coach, I possess tremendous power to make an athlete’s life miserable or joyous. I can be the tool of torture or an instrument of inspiration.

I can humiliate or humor, hurt or heal. In all situations, it is my response that decides whether a crisis will be escalated or de-escalated and an athlete humanized or dehumanized.

About This Book
Coach Yourself is a unique book, compiled exclusively for coaches to provide you with physical, mental and spiritual motivation throughout the season. In his follow-up to A Season In Words, veteran coach Dan Spainhour arms you with quotes and motivational ideas to help you achieve peace of mind throughout the season from how to stay motivated to handling critics.

All Our Mistakes Are Burned Up. Now We Can Start Anew 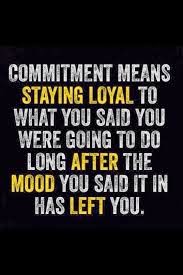 There is a story about Thomas Edison, whom some have said that at one time opened a new shop at the age of 67. Thomas Edison watched as fire destroyed much of his work and equipment. Most of us would say it was time to retire? Was it time to hang up the lab coat? That was not certainly not Edison’s way.

The Inventor said: “All our mistakes are burned up. Now we can start anew.” Edison knew his time to retire hadn’t come. The fire that consumed his work didn’t destroy the fire that burned within him to continue his work. Edison’s commitment remained.

Now I can’t tell you that the above is true, but looking at Edison’s life body of work, his failures and successes, I have come to believe his commitment was there. John Maxwell said that people tend to associate commitment with emotions. Commitment is not an emotion; it’s a character quality that allows us to reach our goals. Emotions go up and down all the time, but commitment is the foundation of rock we stand on. A solid team in business, sports, marriage or a volunteer organization--must have a team of players who are solidly committed to the team.

Maxwell says there are four things every team member needs to know about being committed:

Commitment, because it is a character trait, is revealed, not built, by adversity.

Commitment and talent are not connected. Many talented people lack commitment. Many people who lack skills and talent are tremendously committed. So if you find somebody who’s extremely talented, there is no guarantee that there is a high level of commitment. For this reason, it becomes a great day when we connect talent with commitment; for ourselves and for those on the teams we lead. The moment that happens, the team goes to a whole new level.

A Story About Critics 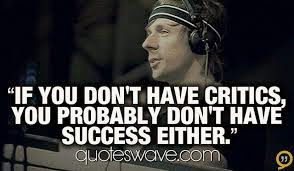 An old man, a boy & a donkey were going to town. The boy rode on the donkey & the old man walked. As they went along they passed some people who remarked it was a shame the old man was walking & the boy was riding.

The man & boy thought maybe the critics were right, so they changed positions. Later, they passed some people that remarked, "What a shame, he makes that little boy walk."

They then decided they both would walk! Soon they passed some more people who thought they were stupid to walk when they had a decent donkey to ride. So, they both rode the donkey. Now they passed some people that shamed them by saying how awful to put such a load on a poor donkey.

The boy & man said they were probably right, so they decide to carry the donkey. As they crossed the bridge, they lost their grip on the animal & he fell into the river and drowned.

The moral of the story? If you try to please everyone, you might as well kiss your ass good-bye.

Words that Sting - How to handle destructive criticism like Jesus