A Parable On Adversity 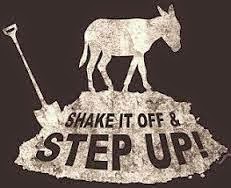 It wasn't long before the old mule, battered and exhausted, stepped triumphantly over the wall of that well. What seemed would bury him, actually blessed him, all because of the manner in which he handled his adversity. That's life! If we face our problems and respond to them positively, and refuse to give into panic, bitterness, or self-pity, the adversities that come along to bury us usually have within them the potential to benefit us!

Coach Yourself by Dan Spainhour